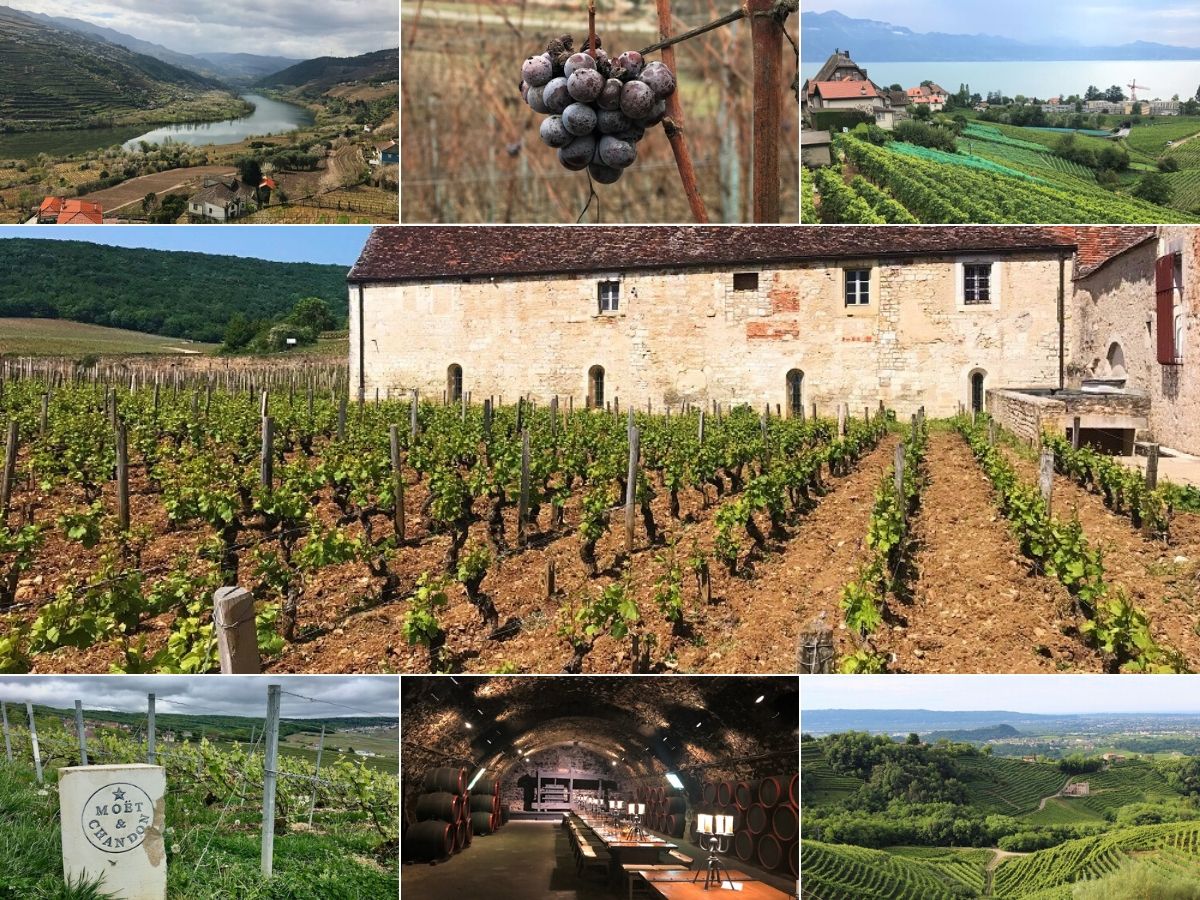 There’s a surprising number of vineyard World Heritage Sites. As lovers of wine, we’ve really enjoyed visiting the different UNESCO site vineyards. It’s interesting how much variety there is here: some famous spots, and some hidden gems as well. Read on for our guide to the best World Heritage vineyards.

Our journey through the best World Heritage vineyards starts with one of the most famous: the Champagne region in north-eastern France. Aside from its World Heritage cathedrals, France has some excellent wine-making Sites. In Champagne, wine has been produced here since Roman times but truly became famous in the 17th century. According to legend, a local monk named Dom Pérignon fermented his wine a second time, in the bottle, after adding sugar and yeast. Unfortunately, the story isn’t wholly true – but Dom Perignon did make important contributions to champagne’s development.

The World Heritage vineyards here are largely spaced out along the sides of a long, narrow valley. There are specific fields in which grapes are planted for champagne, while grapes planted outside these fields can’t be called champagne.

The site also covers the town of Épernay, ground zero for the global champagne industry. It’s here that the majority of the world’s champagne brands have their headquarters, including Möet & Chandon, Taittinger, Veuve Clicquot, Perrier-Jouët, and many others. These headquarters are in fantastic, elaborate buildings, mostly along a street known as Champagne Avenue.

The other remarkable facet of this World Heritage Site are the champagne caves. Traditionally-produced champagne needs to age in the bottle for four years in a cool, dry place. The chalk caves underneath Épernay proved to be the perfect location, and along with natural caves, there’s now miles and miles of tunnels stretching underneath the town and the nearby valley, all full of champagne bottles! It’s truly a remarkable sight.

Climats and Terroirs of Burgundy, France

Still in France, and just south of the Champagne wine region, you’ll find another of France’s famous World Heritage vineyards: Burgundy. The full name for this Site is “Climats and Terroirs of Burgundy”, as the World Heritage aspects actually focus on the intricacies of local wine production. Most importantly, the World Heritage area here covers over 1200 separate vineyards, or “parcels” of land.

Each parcel has slightly different types of soil, a slightly different climate, and so on. It means that winemakers can tweak stunningly small differences in their grapes, and know how the end result will turn out. These carefully controlled areas were crucial to the development of what’s known as the Appelation of Controlled Origin, or AOC. Essentially, once a wine has been fixed with an AOC, it becomes illegal to use that name to refer to a similar product. The best example of this is champagne – anyone is allowed to produce sparkling white wine, but only those grown and produced in the Champagne area called be sold as champagne.

As Burgundy is one of the oldest and most famous French wine regions, the World Heritage area here also includes the towns of Dijon and Beaune. Both cities have impressive medieval cores still intact, with many buildings related to wine production. There’s also, of course, many buildings funded by the profits of wine-making!

Leaving France, we head now to another country famous for wine: Italy. Our first World Heritage vineyard in Italy lies in the north-west of the country, west of Turin. Piedmont is among Italy’s most important wine-growing areas, and it’s here that some of the best Italian wine is produced.

Piedmont most famous for dark, heavy red wines like Barolo, Barbaresco and Barbara, which are all enormously popular. However, the region’s best-known variety is actually a white known as Asti Spumanti. Unfortunately for us, we visited the Piedmont area during January, when all of the vines were barren and mostly dead. There wasn’t really much to see, and most of the wine tourism shops were closed.

One place we did visit, however, was Grinzane Cavour castle. Built in the mid-14th century, the castle is an iconic stone fortress standing among the vineyards. Funded with the profits of the local wine industry, it shows how lucrative viticulture can be. It’s also notable as the home of Camillo Benso, Count of Cavour, who was mayor for many years in the 19th century and greatly enhanced local wine production. He’s also considered one of the architects of Italian reunification.

Still in Italy, heading to the north-east we reach another World Heritage Vineyard. This time we’re at the Prosecco Hills in the far north-east of the country. One of the new World Heritage Sites in 2019, this site is a series of vineyards dotted around hills near Conegliano and Valdobbiadene. It’s the home of Prosecco wine, a white wine that’s usually (but not always!) produced sparkling.

Visiting Prosecco is quite delightful, and a very different experience to the Piedmont region. Prosecco isn’t anywhere near as touristy, and the villages are much smaller. The landscape is wonderfully rolling, and the vineyards cling into the jagged hillsides. It makes for a truly impressive sight!

Although you wouldn’t normally think of Switzerland as a wine-producing country, that’s exactly where our next World Heritage Vineyard is located. In the far west of Switzerland above the shores of Lake Leman, the Lavaux vineyard terraces are like a little slice of the Mediterranean with their sun-drenched vines and low stone walls.

As with many European wine regions, it’s believed the Romans grew wine here. But the modern cultivation dates to the 11th century, when the land was owned by Benedictine and Cistercian monks. Chasselas is the main grape grown here, white produces a dry and fruity white wine.

It’s a really beautiful environment here, as the terraces tower above the lake. The vines all face southwards, so they’re in direct sunlight all day. The light also reflects off the lake, increasing the amount of light received by the vines. There’s also a gorgeous hiking trail that traces its way around the vineyards, up and down the terraces and through the fields. Following it makes for a fantastic afternoon!

The next of our World Heritage Vineyards is another country not normally associated with wine growing: Hungary. Located in Hungary’s north-east, the Tokaj Wine Region is surprisingly large. It covers over 11,000 hectares of vineyards, and 28 wine producing towns. The vineyards here have existed for centuries, but greatly expanded during the 16th and 17th century into the huge area we see today.

Although many varieties of wine are produced in the area, Tokaji aszú is the most famous. It’s the world’s oldest “botrytised” wine, made from grapes afflicted by botrytis, or noble rot. Without going into too much detail, noble rot is a fungus affecting ripe grapes which are then left to dry and partly become raisinised before wine production starts. It produces the strong, sweet wine which Tokaj is famous for, and it’s actually quite delicious! There’s still over 600 wineries in the area, making it one of the larger wine-producing World Heritage Sites.

Last, but certainly not least of our World Heritage Vineyards is the Alto Douro Wine Region in northern Portugal. Located along the long valley of the Douro River, this wine region is home to the world’s most famous dessert wine: port. Developed here in the Douro Valley, port takes its name both from the city of Porto and indeed the country of Portugal.

Wine-making has a rich history in the area, but expanded greatly in the 17th century when port wine was one of the country’s main exports. There’s hundreds of wineries, vineyards, terraces and towns dotted along the valley, which stretches all the way to the Spanish border. And although it’s famous for Port wine, plenty of table wine is produced as well – mostly red varieties.

We had a fantastic time exploring the beautiful valley with its fantastic Mediterranean climate, winding river, towering terraces, and of course delicious wines. It’s an incredible spot, and among our favourite World Heritage Sites in Portugal. 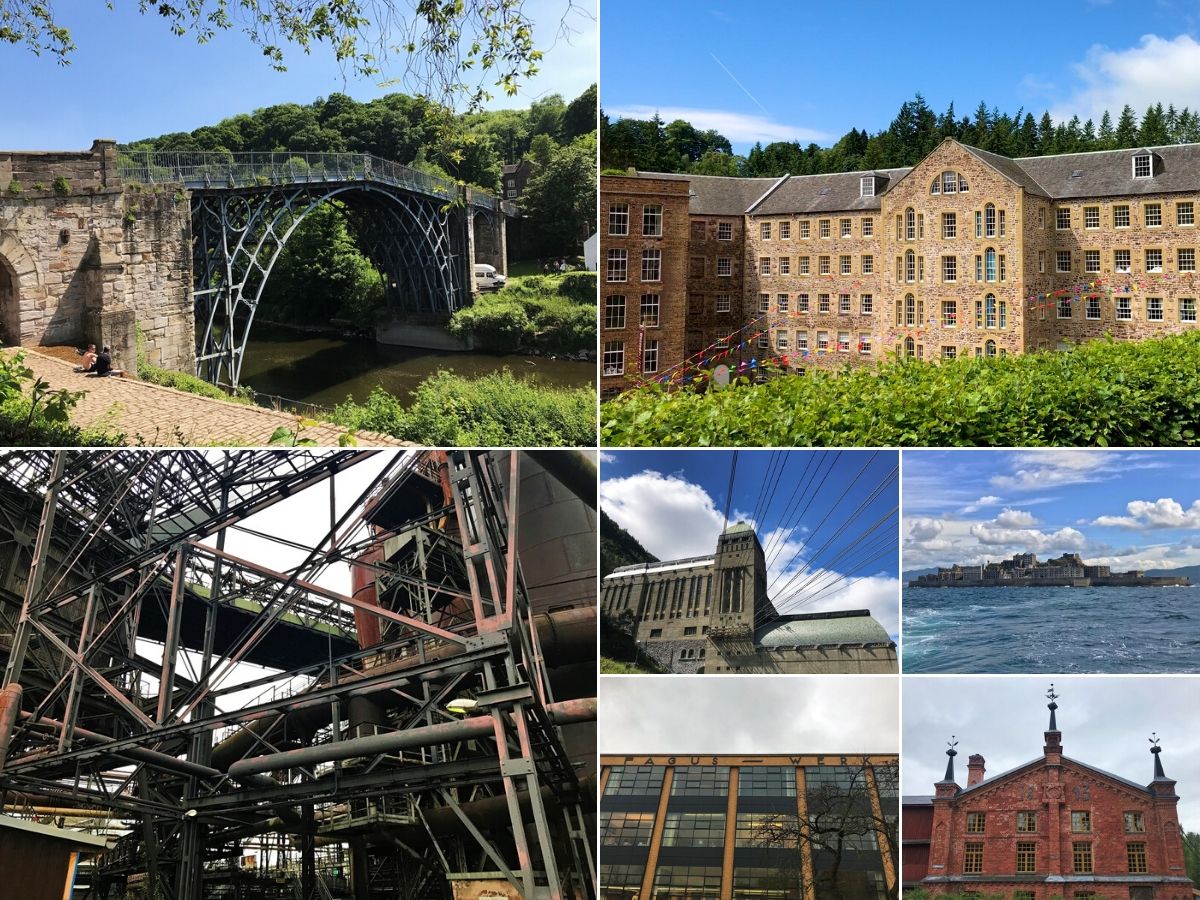 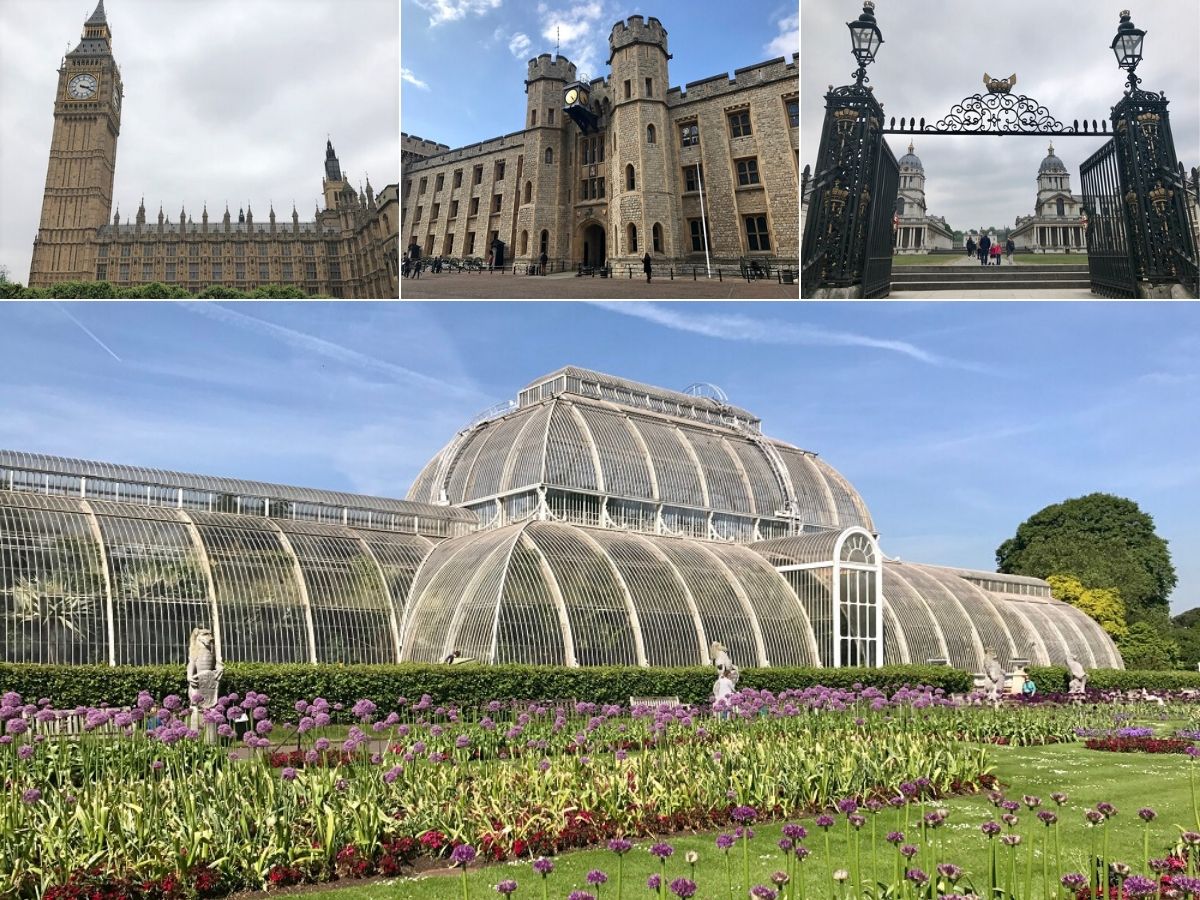